Wolseley Across America 23: OUT OF MONTANA

Montana. September 10, 1805, the Corps of Discovery spent the night in what

is now Lolo, Montana, just south of present day Missoula. The next day we

then turned off on 12 towards Lolo Pass. The map shows this road (12) to be

with few curves, but I had clues otherwise. First, it travels through some

incredible mountains. Second, 12 all the way to Kooskia is marked as a scenic

route. Third it follows the Lochsa River and we know that rivers through

mountains usually follow a crooked path. And last, there was the little clue

that the route was marked in red, "Lewis and Clark Highway, (Wild and Scenic

climb being steep. What I do remember is driving a few miles short of the

pass and thinking to myself what a nice scenic drive. There must be a river

off to my left and the morning mist is rising nicely off of it. Nope. That

was steam off of the Lolo Hot Springs.

Lolo Pass marks the boundary between Montana and Idaho. I didn't see a

sign, but I had entered the 16th State of the trip. 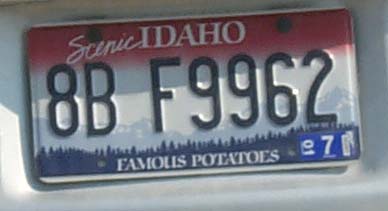 
mottoes. And Idaho doesn't
even produce the most potatoes in the States.


Idaho means, "Gem of the Mountains."
Wouldn't that look better on

For the next 100 miles or so, EG and I had a great drive through

Highway, and the Blue Ridge was only better because it was longer. Much of

the drive followed the Lochsa River, but for a long time you wouldn't have

known it was there. It was somewhere WAY down below. I even stopped at one

there somewhere. I could hear it, but couldn't see it. What I also couldn't

step banks through the thick forest - in the winter snows. 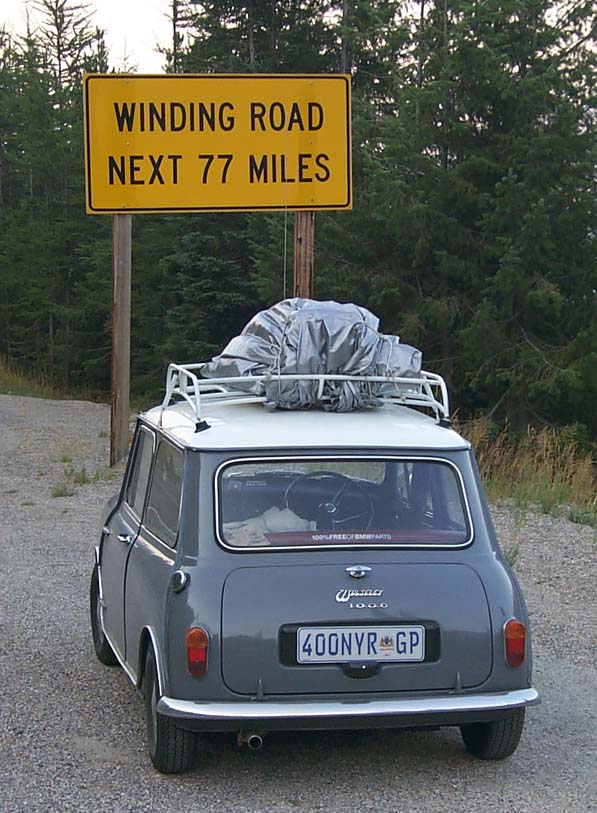 From this angle you probably can't

see the grin on EG's grille. Even loaded down and running on hard tires on 3

½" rims she was looking forward to the next 77 miles. If you look closely,

Some quick statistics to add to our list before we leave Idaho. It's a

Scotland together and the second biggest on the trip - so far. With a

population of 1.2 million it has a density of 14 people per square mile.

to be a recurring theme here!). Kooskia is just inside the Nez Perce Indian

Reservation and is on the edge of the Clearwater River. I turned north still

following 12 and now following the Clearwater all the way to Lewiston, Idaho

and the Snake River.

roughest country in the US and trying to avoid starvation. (So much for the

6-day estimate by the Nez Perce!) Clark had gone ahead and found the Nez

Perce near present day Weippe (just east of 12 and north of Kamiah). The Nez

Perce fed them plenty of dried salmon and camas bread. This diet change made

them sick, almost to the point of being incapacitated. When Lewis and the

rest of the party finally stumbled into the camp, Clark warned them about the

diet. It didn't do any good. The starving men gorged, and soon almost the

entire Corps was laid up.

At this point, fate in the person of another woman stepped in and saved

the Corps. The Nez Perce were tempted to kill the Corps for all the riches

they possessed, including all the firearms that would put the tribe on a more

equal footing with the Plains Indians who were getting guns from the British.

An old woman, Watkuweis, had been captured by the Blackfeet years before.

From there she had been sold to some white traders who treated here well.

kindness of the white men and now argued in favor of the Corps. Her words

(which is about as polite as I can put it!) and finally hobbled their way to

the Clearwater River to build canoes. They were a pathetic sight, but managed

the task even though it took until October 6th. On the 7th, they left the

branded horses with the Nez Perce for safekeeping and pushed off in seven,

new, cumbersome canoes. At least for the first time they had the force of the

By the 10th, Lewis and Clark were already in present day Lewiston. They

also had moved from dense forest to open, barren land; from land where wood

was too plentiful to where it almost didn't exist. It was in the Lewiston

area that the Corps added another food to their diet of dried fish and roots:

dog. From here to the Pacific Ocean, those foods became their main diet and

they purchased dogs from the Indians whenever they could. It is ironic that

Lewis had with him the entire trip his dog Seamus.

From Lewiston, I crossed the boarder into Washington, the 17th State of

the trip, and followed Highway 12 through the high, dry plains farming

country and through Walla Walla. Highway 12 eventually hits the Columbia

River and turns north towards the Tri-Cities area (Pasco, Kennewick, and 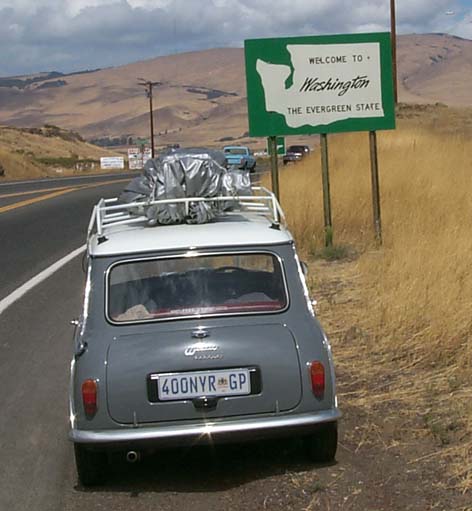 The 17th and next to last State on
the trip.

OK. I cheated a bit. I waited until I
arrived home to take this photo.

Washington is an interesting State. You want ocean? There's the Pacific.

You want rain forest? Some of the greatest rainfall in the world is in the

Rainier at 14,411 feet. There's desert, high plains, and many lakes. There is

also the occasional volcano (remember Mt. St. Helens and 1980?) and

States in size. A population of 5.6 million works out to 84 people per square

mile, again, about the middle of the pack. That's less than any of the first

Tennessee, Kentucky and Illinois. Unfortunately, it seems that most of the

5.6 million all want to commute on the I-5 corridor around the Seattle area

which is consistently ranked as one of the worst traffic areas in the U.S.

1579. (The coastal Indians had already been there for several thousand

years.) Captain George Vancouver reached the Puget Sound area in 1792. He was

looking for the Northwest Passage. He didn't find it either.

for the Alaska gold rush. And in 1909, ten years before the rest of the

nation figured it out, women were given the vote.

Seattle, like Rome, was built on seven hills, and there is a town in

as Portland, Oregon, in anticipation of the All British Field Meet.

Have a Question or Comment of your own? Click here!
2 Comments
From:
Cheleker
Date:
02/24/2013 @ 9:17 PM
Comment:
Cost are over a decade old now and would not be relevant. Even so, that's between me and the South African seller. Recommend such a trip? Certainly, but it would be best done by someone who knows the type of car used and can do one's own repairs. Can't help with recommendations for another type of car.
From:
Adam
Date:
02/22/2013 @ 11:41 AM
Comment:
This is exactly what i wish to do after university! :D in a classic mini too! could you please tell me how much you paid for the mini overall? and if you'd recommend it? and if not, which car (preferably a classic) you would recommend? thanks! :D
Please Wait