Wolseley Across America 22: AND EVEN MORE MONTANA

I need to back up a bit. Although I-15 between Great Falls and Helena in

itself is just another freeway, the country through which it passes can hold

one's interest - what could be seen of it because of the smoke. The road

follows the Missouri River and even crosses it several times. It is easy to

heavy canoes against the river's flow. Around Craig I could see helicopters

rising up out of the trees trailing big fire buckets. The smoke was thicker

and flying somewhere nearby to fight a fire. As I approached Wolf Creek (just

about out of gas, as usual!) I could see high on the ridge behind it the

object of the helicopters. There was a huge fire burning.

ran immediately into a roadblock. I explained to the nice, big, VERY big

gentleman in the Army suit that I was about out of gas, so he let me go

through. I filled up EG (gas mileage had started to pick up a bit) at a gas

station at the foot of the ridge. High above, helicopters were dropping huge

taking a break up the road. Across the street from the gas station, the local

the road watching the firefighting. Beer in one hand. Cigarette in the other

(as if they weren't already breathing enough smoke). Forgive me for saying it

was a hot time in the old town tonight.

After continued adventures since leaving the winter quarters with the

Mandans north of Bismarck, Lewis and Clark found themselves near present day

Loma where two rivers came together. We now know that the one from the north

is the Marias. The other fork is the Missouri. All but two of the Corps of

Discovery were sure that the north fork was the Missouri. The two? Lewis and

Clark. Eventually, scouting reports proved they were probably correct. Once

Lewis and Clark made up their minds, the rest of the group followed with no

dissent. If the falls they were told to expect by the Mandans were found L &

C would be proved correct.

They found the falls (Great Falls, Montana), but, in spite of some

initial poetic language entered in the journals, they soon grew to hate the

area. Not only was there one falls to portage around, but there were five.

day or two. The four trips took about a month and put the group behind on

their timetable to get through the mountains. It would cost them and

contribute to the worst part of their journey.

After the long portage, the Corps of Discovery continued to follow the

Missouri River south through present day Helena. They missed more than one

miles and many days of travel. Although any real hope of finding the fabled

Northwest Passage was gone, they continued following the Missouri looking for

anticipation. There, three rivers come together to form the Missouri: the

Jefferson, the Madison and the Gallatin, as named by Lewis. Jefferson, you

can figure out. The Madison (or "Maddison" as Lewis spelled it) was named for

that out, too. The one you didn't get was named for Albert Gallatin,

secretary of the treasury. It took me about seven days to follow the winding

roads for 2,000 miles along much of the Missouri's banks. The Corps of

miles of the winding river. Of course, I didn't have the pleasure of spending

the winter snowed in north of Bismarck.

The area around the headwaters can be very beautiful, with good lookouts

and viewpoints of the coming together of the rivers or so I'm told. 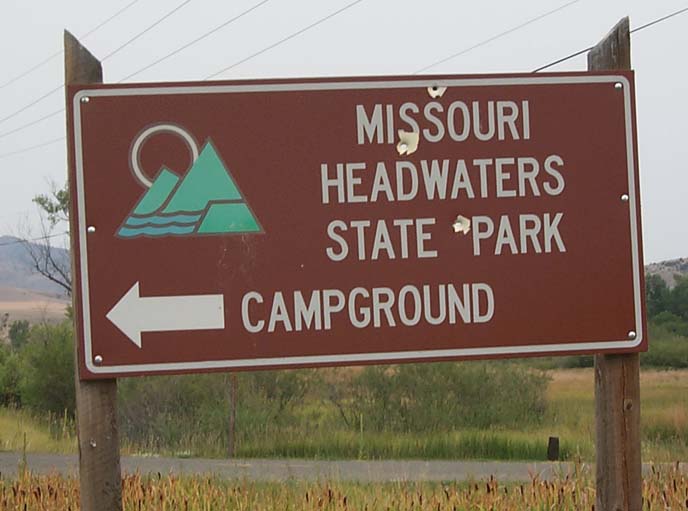 One of many welcoming signs in the Headwaters area. I could hardly
wait. 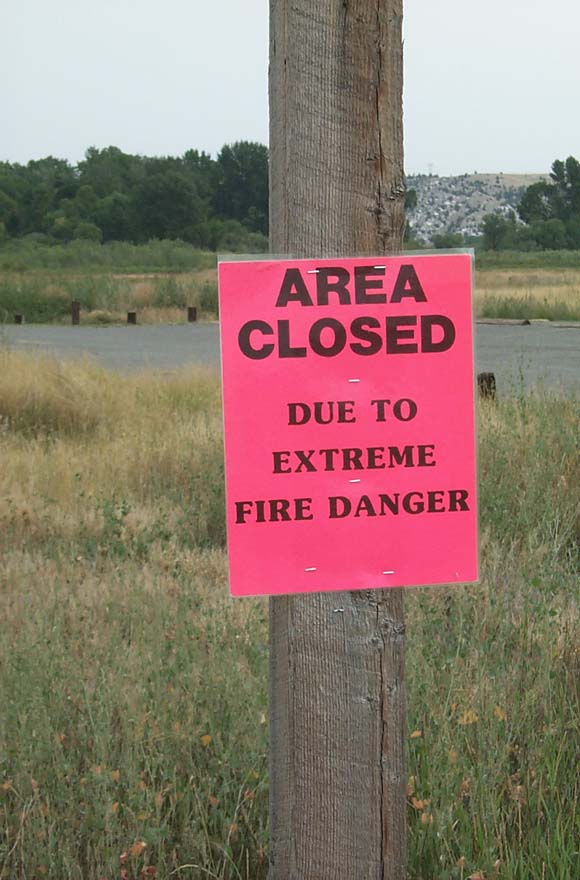 Instead of great sights, I found these signs posted
everywhere.

Every trail, every camp sight, every picnic ground was posted as closed

because of the fire danger. There were few trees, only some along the rivers,

but the grass was very dry. I was shut out.

I filled up EG in Three Forks. I wanted to take another side route later

on and didn't know where the gas stops would be. After being unsuccessful in

finding a restaurant that looked like someplace I wanted to eat, we headed

off up I-90 towards Butte. Lewis and Clark didn't. They continued south along

the Jefferson. It turned out to be the long way around, but they were getting

of the mountains. Without the horses, they were stuck.

Let me tell you about Butte. It has to be about the ugliest spot on earth

that is populated. You'd think that it would be located in a beautiful

mountain setting. You cross a pass of about 6,400 feet to get there (coming

from the direction I was) and Butte itself is 5,700 feet in the crisp

mountain air. There's only one problem. The miners got there first. Stand in

Butte and look around at the hills. There's no other way to put it but that

they've been raped. There was gold and silver, but it was cooper that made

the area. Sometimes called the "richest hill on earth" about 11 billion

pounds of cooper were extracted. That's just the cooper. I wonder how much

scenery went with it. There are those that leave the "e" off of Butte for

Around 1955, most of the easy-to-get-at cooper had been removed so

Anaconda started the Berkeley Open Pit Mine. This turned into one of the

largest, truck-operated pit mines in the world. There's a viewing stand if

you want to take the time to look at the old ugly hole in the ground. I

And I won't even go into the details of Our Lady of the Rockies, a

The pass before Butte wasn't a lot of fun for EG. It was a steep climb

and, although no work was being done, one of the two lanes up the hill was

blocked off with road cones. EG was into and out of third gear, working hard

and holding up traffic. Eventually, I just slalomed between the cones into

the perfectly good blocked off lane to let the traffic by. I did this several

times to the delight (and relief) of the faster cars and trucks.

To make up for the miserable drive to Butte, I decided to try Highway 1

the way to the day's destination of Missoula.

Highway 1, once it gets by the area immediately around Anaconda, turned

out to be a nice drive. Much of it follows the Flint River and, although it

doesn't appear so on the map, has some nice winding stretches. Good road. EG 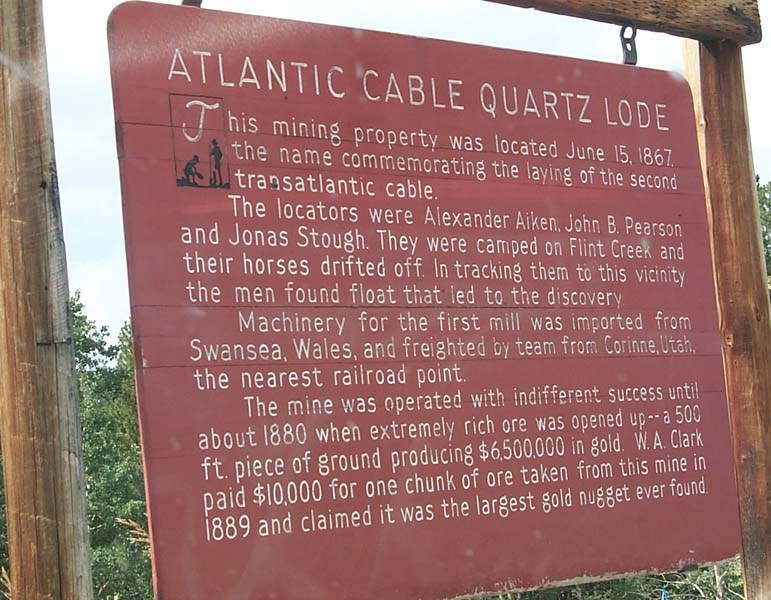 One of several markers along the way
explaining the

many discoveries in the area - which
helped seal the fate of the Indians.

Missoula. It was a bit early to stop, but the next stretch of highway I

wanted to travel didn't leave many opportunities for gas stations and motels.

Besides, I had a hunch the scenery would be great and I preferred to start

to Lolo, just south of present day Missoula. Their trip by canoe, on foot and

9th. EG and I covered it in a fairly short day's drive. Their adventures

exciting and unbelievable of their trip. I can't do them justice in these

short articles, but a couple of things stand out.

If you have a good Montana/Idaho map you can follow along. The C.O.D.

Canyon Dam is today. Lewis had taken a small party and was hiking and

exploring overland looking for the Shoshones while Clark struggled along with

the rest of the party and the canoes. If I remember correctly, Clark wanted

the walking bit, but his feet were badly damaged from the ever-present

my anckle musle." Near the Clark Canyon Dam is a place named Camp Fortunate.

There, Clark and the struggling group were reunited with Lewis, and with

tale in itself.) It was at this meeting place that two things happened that

are right out of a soppy grade B movie. First, one of the Indian women

the Corps of Discover, get off on the right foot. Then, and I'm not making

this up, Sacagawea recognized the Indian chief, Cameahwait, as her brother!

Things were looking up.

The C.O.D.'s route heads west from the Clark Canyon Dam area on 324.

across the Continental Divide to Tendoy. (Tendoy is about where Lewis had

finally caught up with the Shoshones some days before. (You're now in present

day Idaho.) Somewhere along this hike Lewis must have realized that the

crossing of these mountains wasn't going to be easy or quick. The expected

The trek now follows pretty much along 28 then 93 north to Lolo. Follow

though Gibbonsville, Conner, Hamilton, and Stevensville to Lolo, which L & C

finally reached on September 9, 1805. Along the way they suffered snow, sleet

and rain. They met up with the Salish (headed east to the buffalo country)

who were friendly and helped as best they could. They ran out of food and

made meals out of the horse colts. They got lost. They were pretty miserable.

And they still had a long way to go to get out of the mountains. I'm sure

Lolo, or Traveler's Rest as Lewis and Clark called it, became a stopping

point for a couple of days. The Corps took time out to recoup, repair

Pass and the next part of the journey. Here they also met up with three

and then the Corp would meet up with their tribe near the Columbia. I don't

days' trek. I hope they didn't rely on that estimate too much.

I was right. I've reread the above and there is so much left out about

this section of the C.O.D.'s trip that all I can do is encourage you to read

about it for yourself.